Tangerang, August 14, 2017 The world-class auto show series exhibition, GAIKINDO Indonesia International Auto Show (GIIAS) 2017, was officially opened on August 10, 2017.
As the only automotive exhibition organized by the Association of Indonesian Automotive Industries (GAIKINDO), GIIAS 2017 is the 25th GAIKINDO exhibition, an event that has been held regularly and continuously since 1986. This year, the GIIAS 2017 exhibition is taking place from August 10 to 20.
GIIAS 2017 is ready to present the latest range of vehicle products and the latest technology from the international automotive industry. With the theme “Rise of the Future Mobility”, GIIAS 2017 represents the spirit of GAIKINDO in building and growing the Indonesian automotive industry into the future.
Jusuf Kalla: The Government is Prepared to Face Global Challenges
Meanwhile, Vice President Jusuf Kalla who opened the 12th Gaikindo International Automotive Conference (GIAC) on August 11, 2017, said the development of the Indonesian automotive industry was important because the sector had a multiplier effect on the industry and other sectors, “The vehicle industry is very decisive because it has a direct and continuing impact on other industries; if the car industry in Indonesia continues to grow then there will be a few hundred thousand other industries that will also grow. In addition, it will create new employment opportunities for millions of people.”
Kalla stressed that if the government was ready to improve and work on infrastructure and technology, then that goal would be achieved more easily. “The hope is that we can increase car exports. The current effort is to set up a car terminal at Tanjung Priuk and later there will be a larger terminal, which is currently being built near Karawang. Furthermore, infrastructure must be prepared in advance so that car exports can be rapidly increased.”
The Vice President of the Republic of Indonesia expressed his gratitude to GAIKINDO, all vehicle manufacturers, and other supporting industries that work together effectively to expand into overseas markets.
Minister of Industry Airlangga Hartarto also expressed his wish for the progress of the Indonesian automotive industry to match that of the global automotive industry. “Congratulations to the GIIAS exhibition, which has been going on now for 25 years. We hope this exhibition can have a positive impact in introducing new products and technology trends.” In his speech, the Minister of Industry also stressed his hope that GIIAS could provide the public with information about technology development happening within the Indonesian motor vehicle industry.
GIIAS 2017 Presents Three World Premieres
Yohanes Nangoi, the General Chairman of GAIKINDO, conveyed GAIKINDO’s goal for GIIAS 2017 to become an event that builds and enlarges Indonesia’s automotive industry into the future. “We hope GAIKINDO’s contribution through GIIAS 2017 can help develop Indonesia’s automotive industry as one of the industries that have a significant role in the Indonesian economy. As well as continue the spirit and initiatives of GAIKINDO in building and developing the Indonesian automotive industry. ”
GIIAS 2017 is fully supported by 32 GAIKINDO-member car brands, including 24 brands of passenger vehicles, namely: Audi, BMW, Chevrolet, Daihatsu, Datsun, Dodge, Honda, Hyundai, Isuzu, Jeep, KIA, Lexus, Mazda, Mercedes-Benz, MINI, Mitsubishi Motors, Nissan, Renault, Suzuki, Tata Motors, Toyota, Volvo, VW and Wuling, as well as eight brands of commercial vehicles, namely, DFSK, FAW, Hino, Hyundai Bus and Truck, Isuzu, Mitsubishi FUSO, Tata Motors, and UD Truck. Support also comes from more than 300 automotive industry players in Indonesia.
“This year we have invited exhibitors including APM to present and exhibit new products, product development and new technologies so that people and automotive industry players in Indonesia have a better understanding of the rapid progress of the automotive industry in other developing countries.” Nangoi also mentioned that GIIAS 2017 included more than 40 new vehicle launches, including world premieres, Asian premieres, Indonesian premieres and concept car launches.
On this occasion three APM chose Indonesia and exhibition GIIAS 2017 as the location for the world premiere of new vehicles and concept vehicles. UD Trucks became the first commercial vehicle manufacturer and participant to present a world premiere for its latest product in the light duty segment, the Kuzer Truck. UD Truck explained that it chose to launch light truck products in Indonesia because the commercial vehicle market in Indonesia was considered to have great potential. In addition, the need for light trucks that are increasing in Indonesia was also the reason for choosing Indonesia & GIIAS 2017 as the location for the launch of the Kuzer Truck.
Meanwhile, from the passenger cars segment, Mitsubishi launched its small MPV flagship Mitsubishi Xpander for the first time in the world.
As a vehicle manufacturer from Japan, Daihatsu helped maximize its participation in GIIAS 2017 by exhibiting two concept vehicles for the first time in the world, namely DN F-Sedan and DN Multisix.
The chairman of GAIKINDO further said, “We hope that exhibitors who are also members of GAIKINDO continue to play an active role in developing the Indonesian automotive industry, one way they can do this is by presenting more and more world premieres in Indonesia. This effort will certainly help advance the Indonesian automotive industry, which has a strategic role, and have a double impact in contributing to the national economy,” said Nangoi. 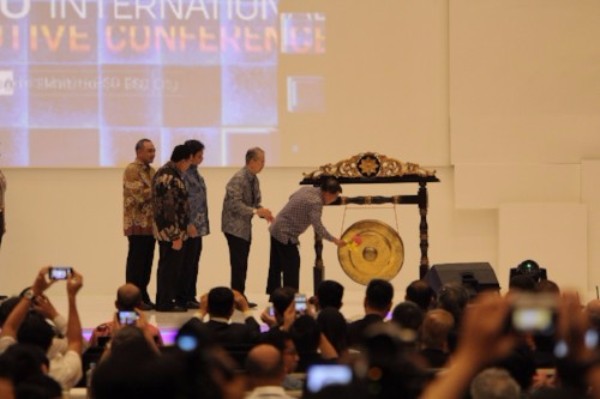 Vice President Jusuf Kalla who opened the 12th GAIKINDO International Automotive Conference (GIAC) on August 11, 2017, said the development of the Indonesian automotive industry was important because the sector had a multiplier effect on the industry and other sectors